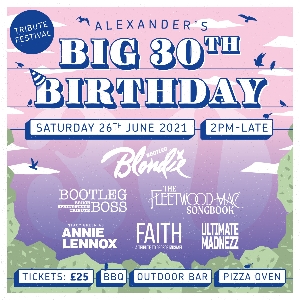 Alexander’s opened 30 years ago on 21st June 1991 and we have been enjoying a wide range of great live entertainment welcoming some amazing acts over the years. We have of course been waiting for the return of live entertainment after the hardest year the industry has ever seen and we are really excited to be back with a bang and bring you a huge line up for your Big 30th Birthday Trip Fest on Saturday 26th June.

Ultimate Madnezz
We are ‘Ultimate madnezz’ the midlands tribute act,
Bringing ska to the stage in a bowler hat!
With 5 * reviews on our comments page,
We love nothing more than storming the stage!
Up on the boards it’s Richie Key,
He wears baggy trousers with only 1 knee!!
Pass the Bass but don’t pass Kie,
nodding his head to the count of three! (1,2,3)
Dans at the back in the important seat,
keeping time to the rock-steady beat!
Nik likes to dance around with the rest,
As he plays his guitar in his Sunday best!
Simon bowls us over with his bogus dance shuffling on his feet,
but our very own music man never misses a beat!
On sax is josh with his cheeky smile,
watch him wear his Fez as we take you down the River Nile!
And at the front and producing all the madness sound,
It’s Marc the craziest front man around!
So if you're coming in off the street,
And you're beginning to feel the heat!
Well, listen folks
You’ve done a enough research and looking,
Get in in touch and make a booking!
So you can start to move your feet,
To the rockinest, rock-steady beat of .....Ultimate Madnezz!!

Stacy Green as Annie Lennox
Stacy has been working in the tribute industry for some years and has been asked countless times if she was an Annie Lennox tribute and the answer was always no......until now!

Stacy bares a more than striking resemblance to one of the greatest women of the UK music industry and many people have had trouble determining if she and her photos are actually her or that of Annie Lennox herself. So much so, Stacy was a finalist in the lookalike category at the National Tribute Music Awards 2018.

After many people asking about it, Stacy finally developed her resemblance into a fully fledged tribute show, complete with authentic replica costumes, some of which are vintage to add authenticity to the show, plus her beautiful Scottish accent and piano skills! All this hard work has led to Stacy being awarded the title of UK's No.1 Annie Lennox Tribute by the Agents Association at the National Tribute Music Awards 2018!

During their dynamic, hit packed show you can expect to hear well loved songs from all eras of FM's incredible 50+ year career ... Go Your Own Way, Little Lies, Dreams, The Chain (the Formula One racing theme song), Don't Stop, Everywhere, Rhiannon, Seven Wonders, Oh Well, Big Love ... from the 60's 'Blues' incarnation of the band with frontman, Peter Green, through the 70's massive, multi million selling 'Rumours' album and slick 80's, hit single packed production, 'Tango In The Night' this is a popular show for all ages and the urge to get up and dance always proves to be irresistible!

Bootleg Blondie
THE WORLD'S N0.1 OFFICIAL BLONDIE AND DEBBIE HARRY TRIBUTE BAND Est.2001, THANKED ON BLONDIE'S POLLINATOR ALBUM. BOOTLEG BLONDIE ARE THE ONLY BLONDIE TRIBUTE TO PLAY AT CBGB IN NEW YORK AND TO HAVE BLONDIE'S DRUMMER CLEM BURKE PLAY WITH THEM ON EXCLUSIVE TOURS OF THE UK! LEAD SINGER DEBBIE HARRIS HAS APPEARED ON TV FOR BBC 1 AND YOU CAN CHECK OUT HER AND THE BAND ON www.bootlegblondie.com