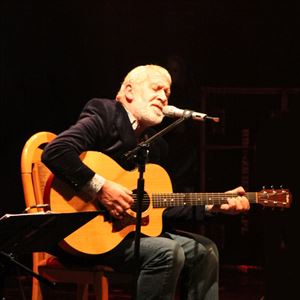 All Gordon Haskell - Still trying to Figure Out performances

It is often said that great suffering breeds great art. Following a hugely successful career, Gordon Haskell, was content with his life on a Greek island until the political situation there rendered him in a place where he had seemingly lost everything. In a six-week period of solitude he wrote the songs that were to become ‘The Cat Who’s Got The Cream’, his brand new album that is unquestionably his best work to date. It is proof that one’s misfortunes in life can be turned around to feel more like a victory than a loss.

Gordon Haskell is an English musician and songwriter. A pop, rock and blues vocalist, guitarist, and bassist, he was a school friend of King Crimson guitarist Robert Fripp, the two first working together in Fripp's mid-1960s teenage group the League of Gentlemen.