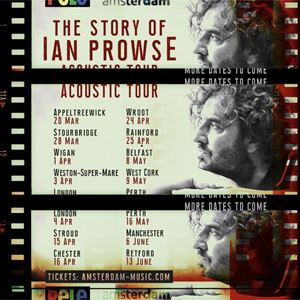 'Ian Prowse has 8 albums of acclaimed songwriting under his belt along with 30 years of experiences at the coal face of rock & roll music. On the RaconTour Ian will present an evening of passionately skilled songwriting & fantastic stories stretching from his early days with Polydor singed act Pele through the highs & lows of Amsterdam to today's position as a highly respected tune-smith.
Tears, fun, rabble rousing, gossip and a damn good sing song, all in one night'.
Here I Lie: https://www.youtube.com/watch?v=L654O4n4_Po
Does This Train Stop On Merseyside: https://www.youtube.com/watch?v=xsWFYucvrVw
Home: https://www.youtube.com/watch?v=Qf2QNDZpeTw
Kitchen Disco Records are excited to announce the release of ‘The Story of Ian Prowse’, a career spanning retrospective of Ian Prowse’s music on February 28th 2020.
The album includes much loved tunes from Ian's first indie cult band, Pele. Classic songwriting from Amsterdam, and favourites from the 3 Ian Prowse solo LP's released this decade.
’The Story of Ian Prowse’ also includes duets with Christy Moore and Elvis Costello, five songs playlisted by Radio 1 and Radio 2, a #1 hit in South Africa and a brand new track called 'Only The Love'. This release will underline Ian's reputation as one of the UK's most consistent songwriters.
Often described as the ’Scouse Springsteen’ for his full on live performances, Prowsey is supporting ’The Story of Ian Prowse’ with an extensive acoustic tour across Britain, starting immediately after supporting Elvis Costello and the Imposters up and down the country in March.
This live acoustic show will not only include Prowsey’s most well known and loved tunes but it will also share some of the wild and wonderful stories behind them. What really happened to end Pele? What we're the terrible downs and unexpected ups that occurred to get Amsterdam going? What's it been like to met & play with your heroes?
All will be revealed on The Story Of Ian Prowse tour 2020!