Friday Night Comedy brings the very best comedians from the UK and beyond to Alexander’s Live in the heart of Chester.

The only weekly comedy night in the city Friday Night Comedy will keep the laughs coming thick and fast week after week. For each
show we provide four brilliant comedians hand-picked to give you the best night out for the lowest possible price.

We also have our amazing bar, offering a huge selection of craft beers, ales, lagers, wine, gin, rum, whiskey, cocktails, soft drinks
and much, much more. you can be sure Friday Night Comedy customers will all have a great night out! It’s an offering like no other
elsewhere in Chester!

**Please note that seating is unreserved, on a first-come first-served basis and that all line-ups are subject to change without prior notice**
ALL FRIDAY NIGHT COMEDY SHOWS ARE 18+

We pride ourselves on bringing the best acts to Chester hosting events most days. Throughout the warmer months we host large live events in Rufus Court and our festivals days in the Alexander's Beer Garden. Please note that some events will require tickets to gain entry and at most events seating is unreserved and extremely limited. However, the dance floor will be in full swing!
We will always do our best to make your visit as fun as possible and if you have any questions, please do not hesitate to get in touch using the form at the bottom of this page. 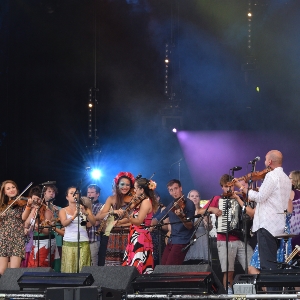 This event is for 12 and over - No refunds will be issued for under 12s.

"Truly the most joyous noise I have ever heard and re-affirming my faith in the potential of the
human race." Jon Bens

The band's touring line-up features a stage-challenging 50 members. Among them are 15 horns, four
cellos, five percussionists, five electric guitarists, plus fiddles, flutes, clarinets, electric bass, acoustic
guitars, and an accordion. They sing too.

Formed in 1997 at Birmingham’s prestigious Conservatoire by fiddle player and arranger Joe
Broughton (The Urban Folk Quartet, The Albion Band, Joss Stone), the Conservatoire Folk Ensemble
have established a reputation for creating energetic and powerful shows. Their increasingly popular
live appearances - especially at such festivals as Cropredy, Towersey, Shambala and Kendal Calling
- have left audiences ecstatic and even (at Towersey) moved to tears.

Still based at the Royal Birmingham Conservatoire, the personal influences of each member shapes
the set-list, as traditional English and Celtic reels slide into full-on rock grooves, funk, jazz, hip-hop,
ska and reggae. Eastern European and Asian flourishes can also be heard, reflecting the rich cultural
heritage of the group.

This is very much 21st century folk.
This is ‘Power Folk’.

“There’s subtlety, poignancy, variety and more than a soupçon of talent. You’ll like this, like it
lots I know you will.” Simon Jones, fRoots

“Painted is an absolutely superb, inimitable and totally unmissable album that should have a
copy in each and every home.” Joe Knipe, Artree

Please note line up and start times are subject to change