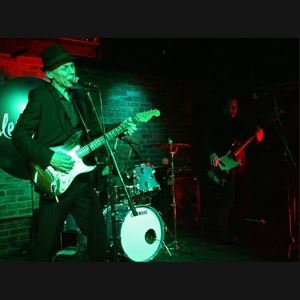 All One Eyed Crow performances

Show narr :
One Eyed Crow deliver a blistering mix of original and classic blues. Whether the groove is slow and soulful or fast and loose these guys from Merseyside always pack a punch.
After 6 years touring the UK and Europeasleadguitarist with the award winning blues singer Connie Lush, Pete Wade along with long time collaborators Pete Somerville and Paul Tsanos, was ready to unleash his own brand of electric blues on the world. Influenced by blues giants like B.B.King, Albert Collins, Stevie Ray Vaughan and Rory Gallagher, Pete has developed his own unique style and was described as one of the best blues guitarists on the circuit by Blues Matters magazine.
Pete first cut his teeth as the charismatic lead singer/guitarist with the hugely popular 80's rock band Engine.  With their wild stage antics and high energy boogie rock, they were affectionately known as "the long haired lunatics from Liverpool", and for over a decade, entertained audiences all over the UK, alongside the likes of Uriah Heep, Suzi Quatro and Canned Heat.
Drummer Paul Tsanos has played with some of the top names on the Liverpool music scene, including Pete Wylie and Ian McNabb, Connie Lush & Parlour Flames with Bone head from Oasis. He also performed alongside Ringo Starrat the Liverpool Capital of Culture concert at the Echo Arena in 2008.
Bass player Pete Somerville was recruited after he supported the legendary blues man Peter Green at the International Guitar Festival of Great Britain and he has also played with Ian McNabb.
With their authentic sound and highly entertaining show, this exciting blues trio are gaining a reputation as one of the best new blues bands around.     Catch them now and have yourself a great night out.